Refer Limitations and Troubleshooting sections of the documentation.

To use VKtracer you need to have an active subscription. We offer a 32-day free trial. To activate a paid subscription or free trial, visit your account page. In the app, you can review the current status of the subscription from the main menu. Click Subscription menu item to re-check subscription status.

The picture shows the interface of VKtracer: 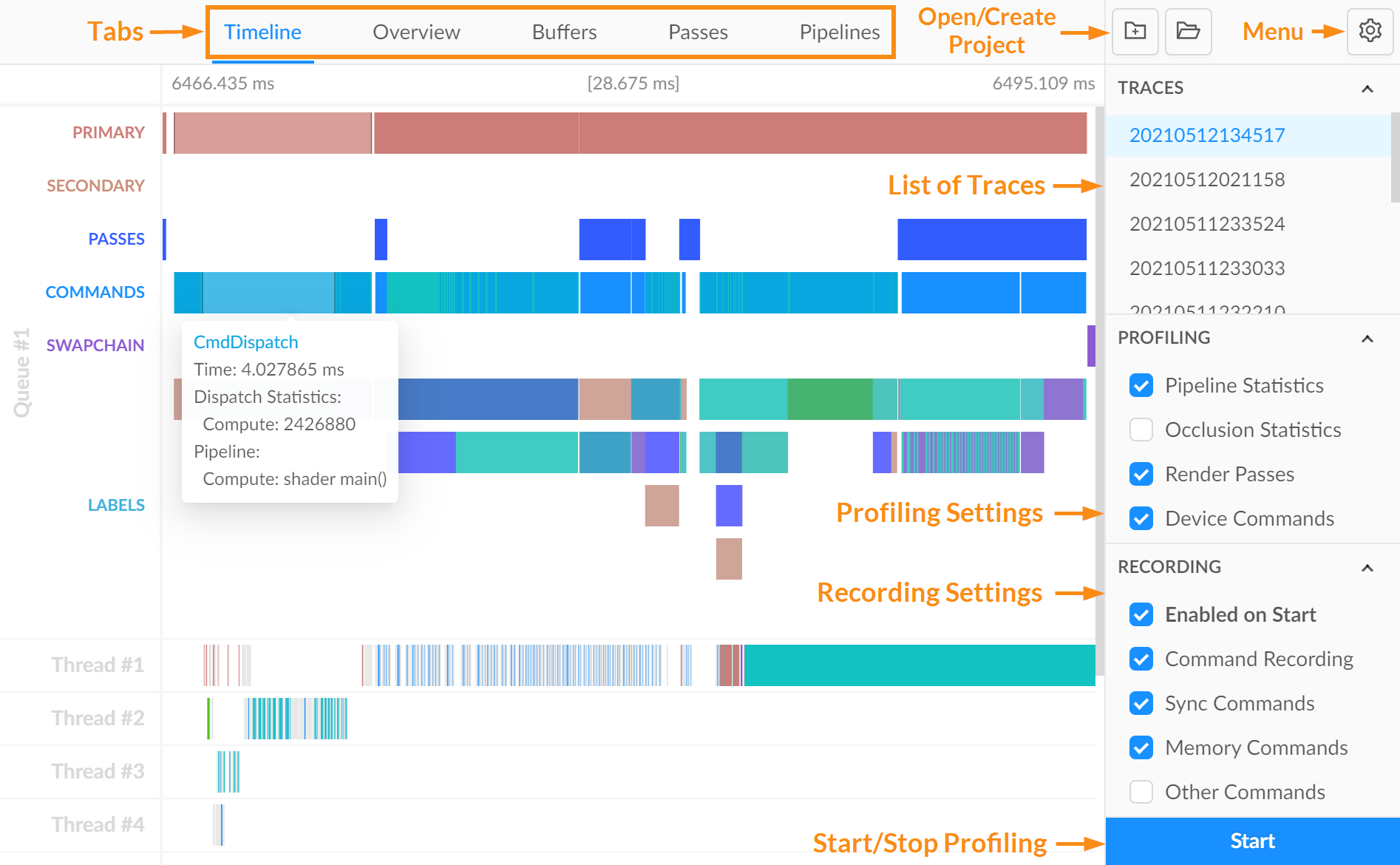 To create a new project, press the corresponding button, and fill in the form. 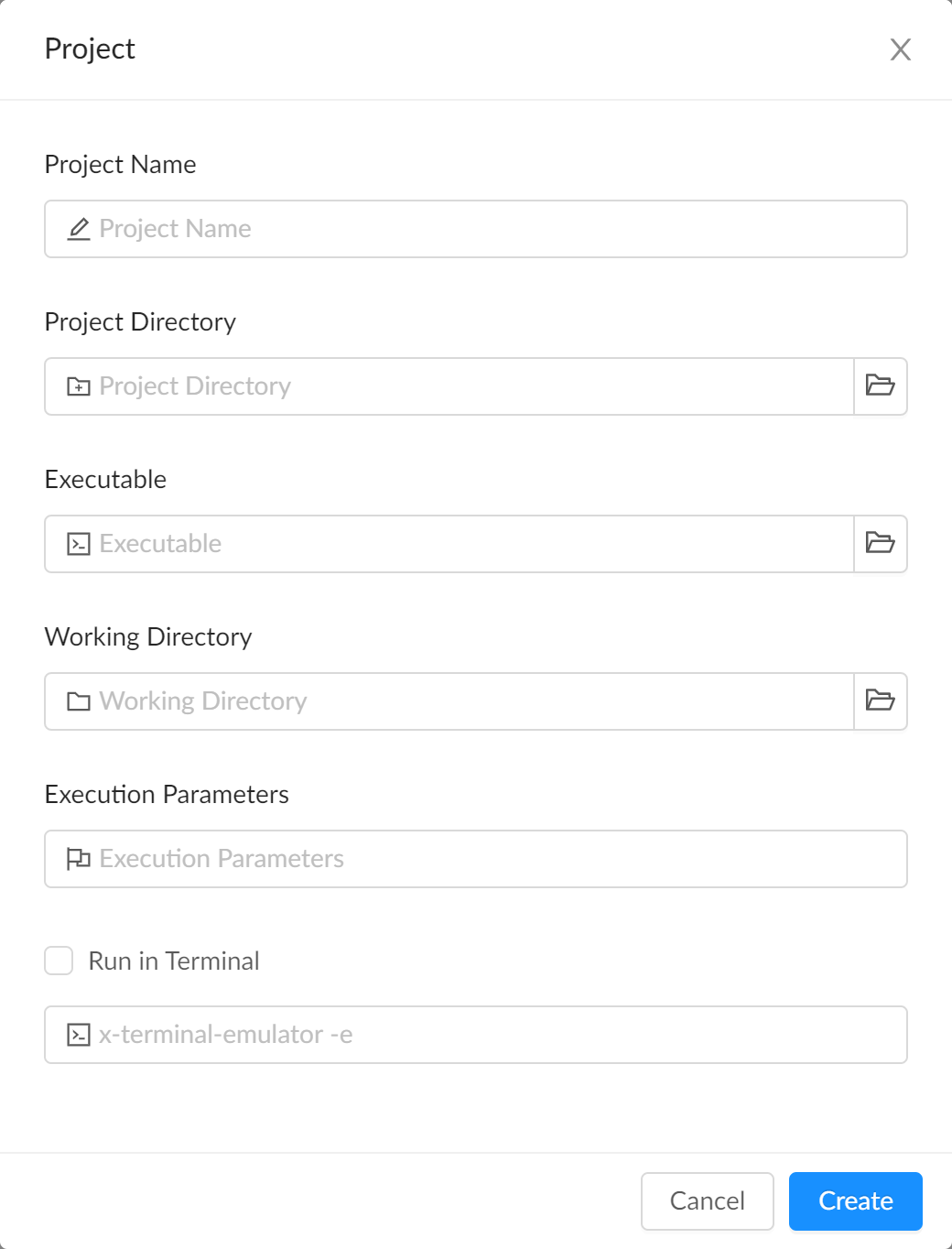 You can change the working directory, flags, and terminal options at any time in project settings, available from the main menu.

For most Linux distros the default command to run the app in terminal (x-terminator-emulator -e) works fine. It will use the default terminal emulator. You can override it, e.g. gnome-terminal -e. Note, that when profiling in a terminal emulator, VKtracer cannot handle application exit and show a meaningful warning in case anything is wrong. If you experience any issue when running in a terminal, first try to uncheck this option and try to profile again.

Press the "Start" button to begin application profiling. Once the application closes - profiling is finished and the trace is opened. You can select the current trace in a list on the right. Here you can also delete or rename any trace through its context menu.

During profiling, you can start and stop trace recording anytime. You can also record the next 60 frames or the next second.

Two sub-menus in the sidebar provide profiling and recording options. 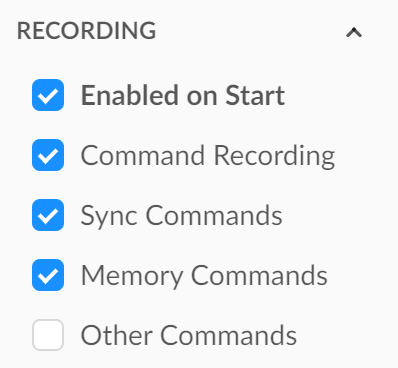 By disabling the collection of metrics and profiling of device commands or render passes one can reduce the overhead of VKtracer. Disabling the recording of commands reduces size of a trace and speeds up timeline rendering. If you would like to profile several frames or time interval we recommend to disable recording on start to skip initialization phase and don't record boilerplate.

We recommend that your application exits normally by itself to finish profiling. You can use the "Stop" button but in this case, trace can be truncated. First, VKtracer will try to gracefully close the application using taskkill (WM_CLOSE message) on Windows or kill (SIGTERM signal) on Linux. If the application doesn't close after 5 seconds timeout, VKtracer will forcefully terminate it by taskkill /f (WM_QUIT message) on Windows or kill -9 (SIGKILL signal) on Linux. If the profiled application doesn't properly close on WM_CLOSE/SIGTERM, profiling information may be lost.

From the main menu you can: 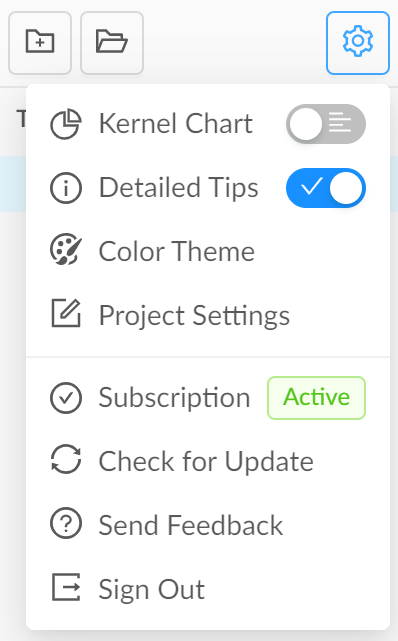 Timeline is the most useful tool for analysis of Vulkan rendering and computational workflow. Easy to understand visualization provides deep insight into how your pipeline actually works. You can find out what time is taken by each operation, render pass, command buffer, or review particular sequence, check order and dependency chain, find bottlenecks and stalls, analyze GPU utilization, determine whether computation capabilities of the device are fully utilized. Timeline allows you to zoom in up to every detail, and at the same time gives you a bird’s eye view of how your application works. So you can explore it at both coarser and finer scales. The timeline view is pixel-perfect, highly responsive, and provides smooth experience even when there are millions of Vulkan commands recorded. 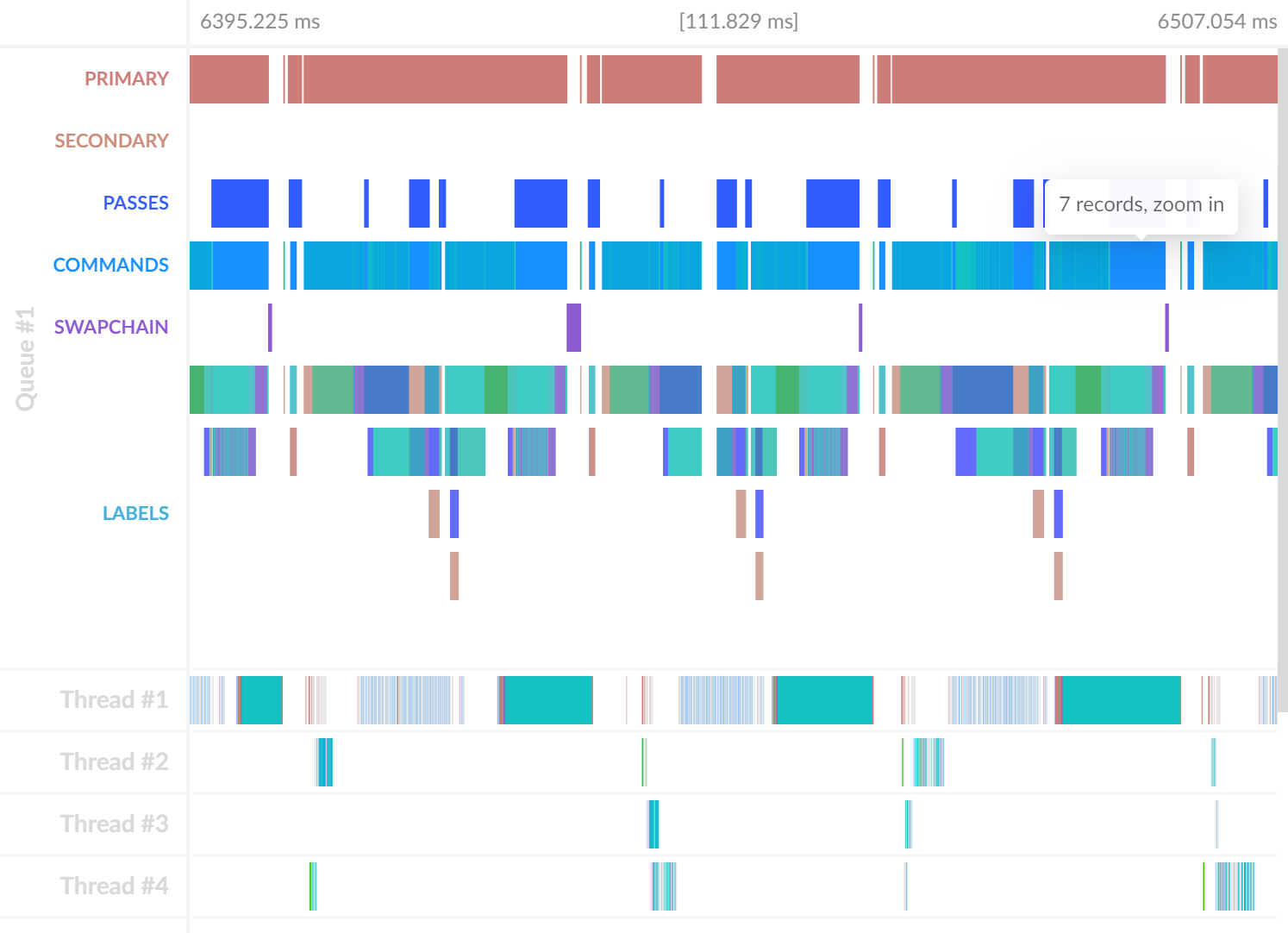 The next picture shows the basic elements of the timeline view. 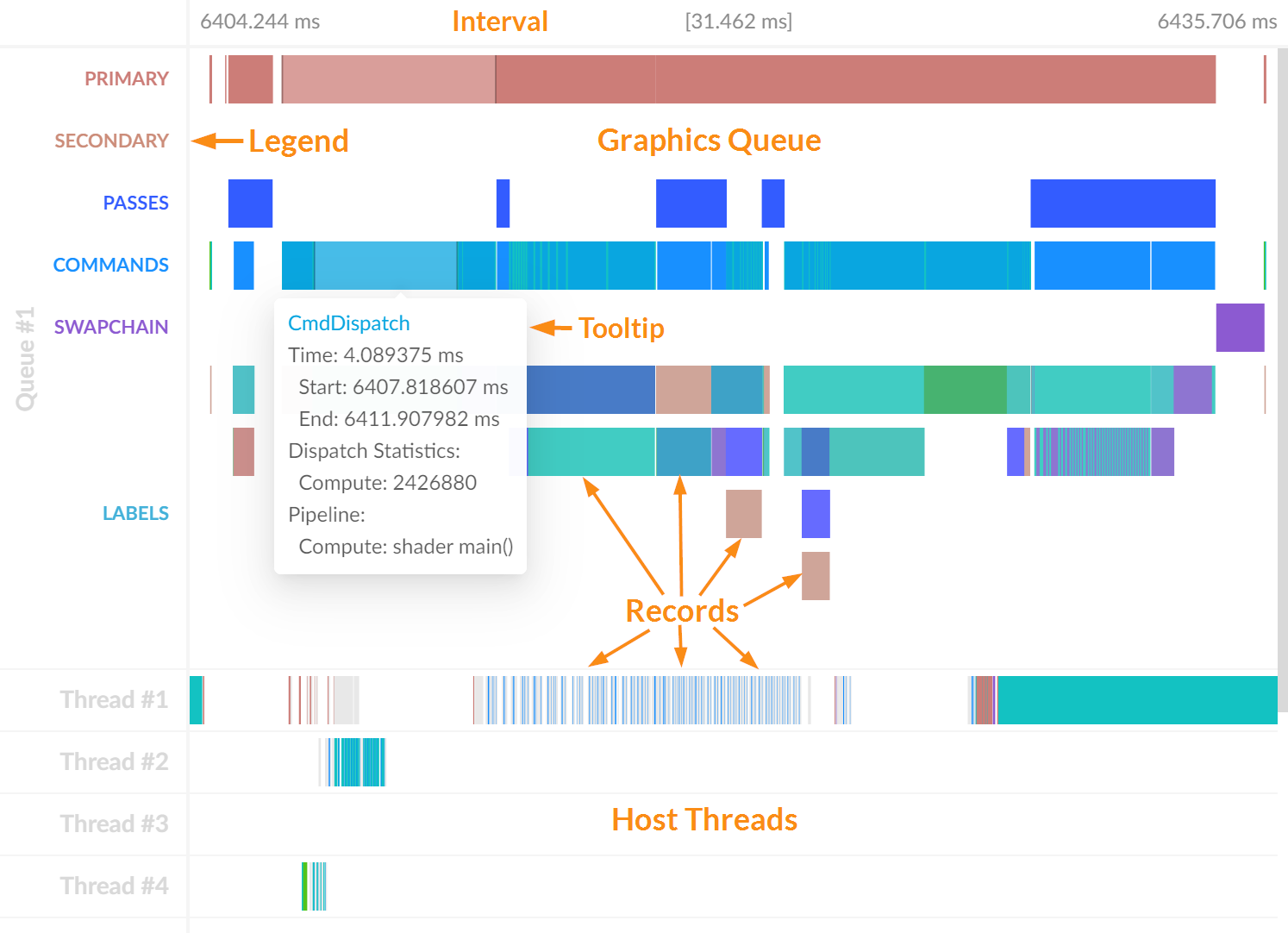 Timeline presents every Vulkan operation (record) executed by an application on both host and device sides. VKtracer records both device and host timings, as well as relevant workload metrics when corresponding options are enabled. There are separate lanes for each device queue and host thread. For device queues operations are hierarchically grouped by their types: Command Buffers, Render Passes, Device Commands, Swapchain, and Labels. The current interval and its duration are shown at the top, legend - at the left.

On record hover, a tooltip with detailed information is shown, and the record itself is highlighted in both device and host lanes. For command buffers and device commands tooltips provide timings and workload metrics. Render pass tooltips additionally show a collection of attachments. If underlying object has been provided with a name by vkSetDebugUtilsObjectNameEXT() it's included in a header. 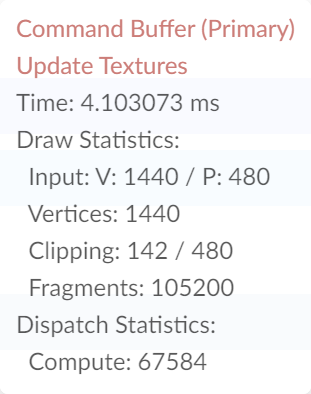 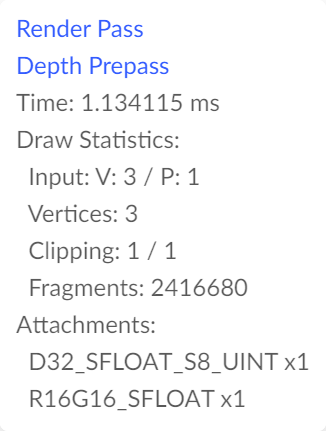 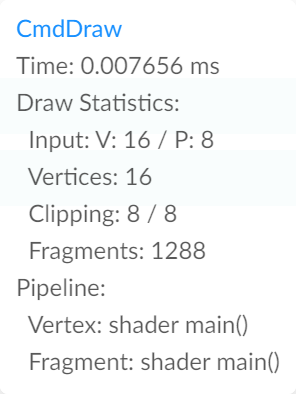 You can choose between essential and detailed tooltip information in application settings. By hovering a device queue in a legend, you can get the name of the corresponding GPU. 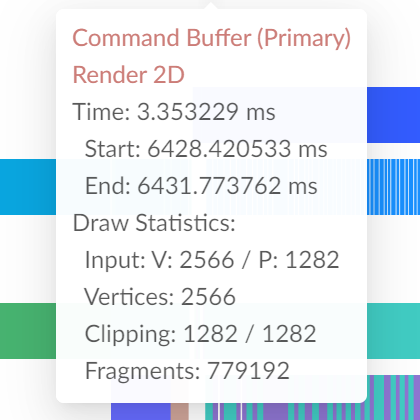 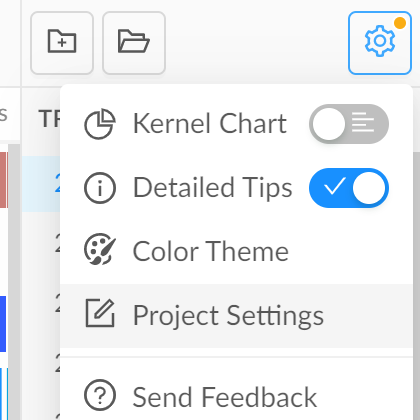 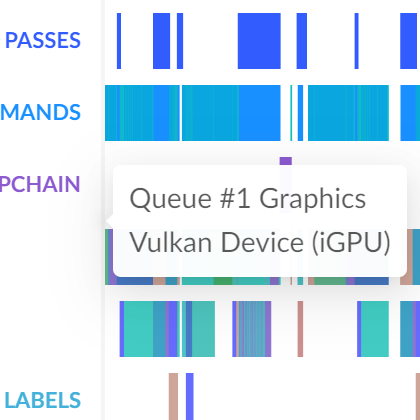 Here we will explain how to control the viewport time interval in the timeline. In fact, it's intuitive and easy, it's very similar to that in image editing apps.

Overview tab shows overall aggregated performance statistics of the time interval currently shown on the timeline. The notable feature of VKtracer is that all views are synchronized and metrics are provided for the same time interval. This allows analyzing different stages of the rendering or computation workflow. You can explore an app at both coarser and finer scales, review metrics for the whole application, one frame, down to a single command buffer, render pass, or even command. 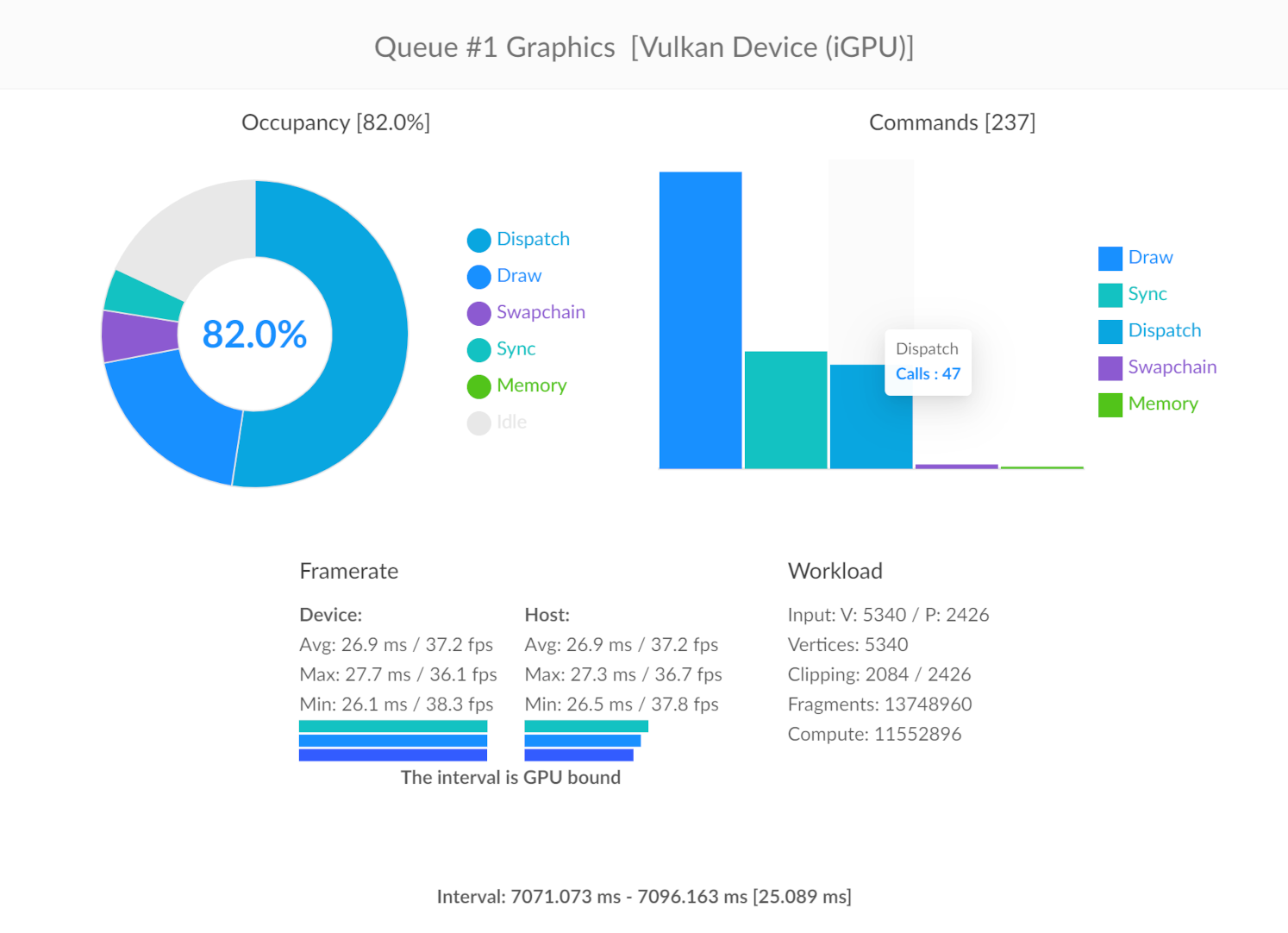 Occupancy charts how much time is spent on each type of workload and time GPU was idle. This shows how efficiently your app utilizes device resources. The lower idle time, the better utilization of the corresponding device. The distribution between workloads gives insight into where to look for optimization opportunities. Either it's draw/dispatch pipelines, memory transfers, or synchronization stalls. The bar chart presents a number of commands submitted to the queue per workload type.

The frame rate section provides information about frame timings and device/host activity. For the host side, the frame time is an interval between two consecutive vkAcquireNextImage and for the device - between vkQueuePresent commands. For the current time interval shown on the timeline average, minimum and maximum frame times and FPS are evaluated.

The next are charts of device and host activity. This is the percentage of time between frames spent on the actual work. The device is assumed to be inactive between the end of the latest vkQueuePresent and the start of the next command buffer submitted to a queue. The host is inactive while waits for the next swapchain image to become available (vkAcquireNextImage) or waits for command buffer to finish execution (vkWaitForFences, vkDeviceWaitIdle, vkQueueWaitIdle, etc). Then there's a comparative interpretation of device and host activities that determines which side is a bottleneck. If the device is active most of the time the interval is considered to be GPU bound. Otherwise, if the host's activity is higher than 90% - CPU bound. If both are idle for more than 20% - there's no bottleneck.

During profiling VKtracer collects workload metrics of every command buffer, render pass, and device command execution. This option can be enabled/disabled in PROFILING sub-menu of the sidebar. The notable feature of VKtracer is that all views are synchronized and metrics are provided for the same time interval.

The next metrics can be collected:

There are 3 tabs: for command buffers, render passes, and device commands. Each tab presents metrics per object of the corresponding type accumulated for the time interval. Device command metrics are accumulated per the corresponding pipeline object. At the top, you can select a metric of interest. You can also evaluate the value of one metric ratio another, e.g. average time per execution, the number of vertices shaded per second, or the number of primitives passed the clipping stage ratio the number of primitives generated by geometry shaders. Objects can be filtered by their type, e.g. primary and secondary command buffers or draw, dispatch, or ray tracing commands. You can switch between bar and pie chart representations in the main menu. 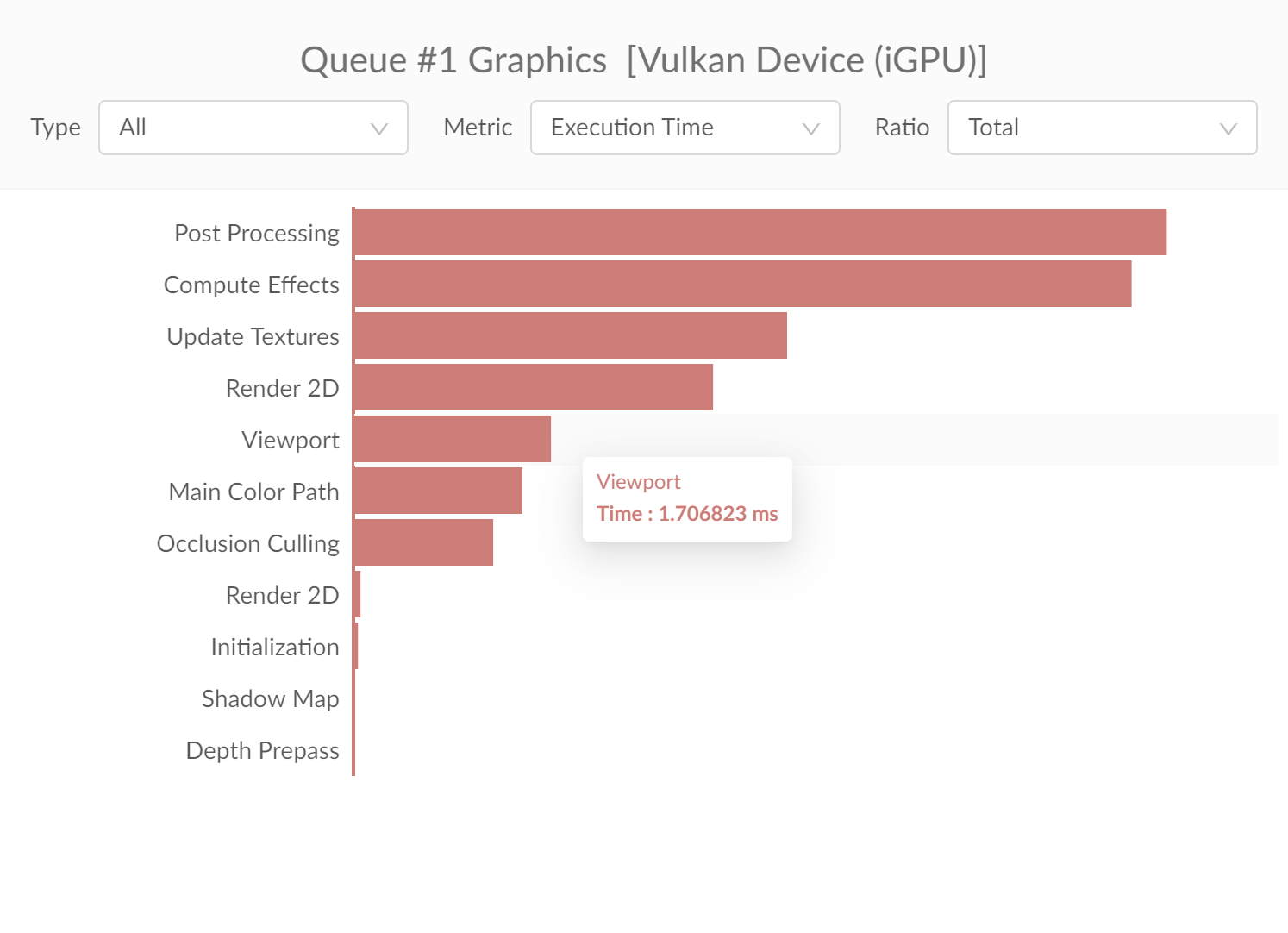 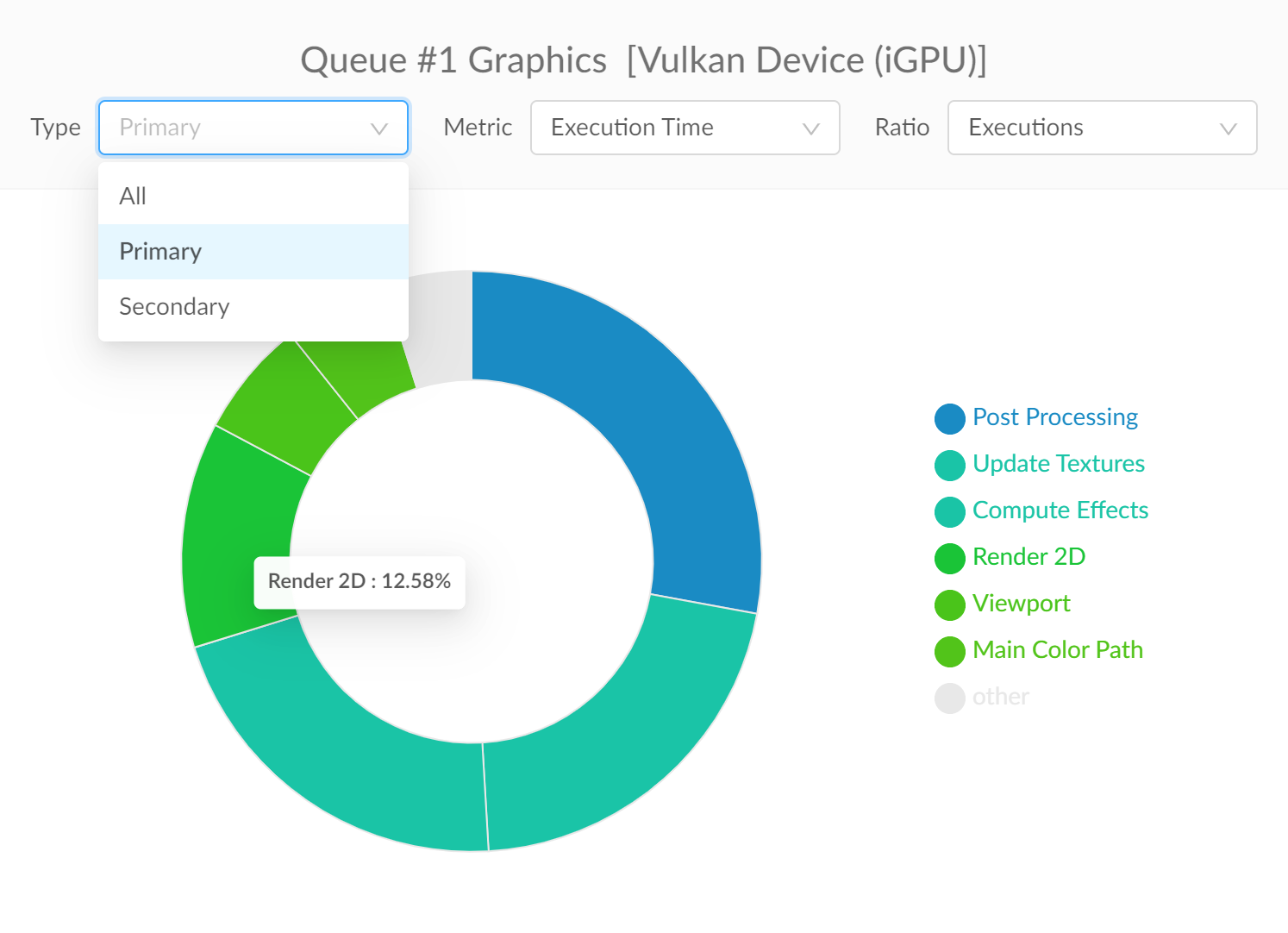 Labels help developers to annotate sections of a pipeline. They are useful to group commands into logical portions of the algorithm. Labels support hierarchical nesting which is handy in complex scenarios. Vulkan has support for debug labels through the [VK_EXT_debug_utils] (https://www.khronos.org/registry/vulkan/specs/1.2-extensions/man/html/VK_EXT_debug_utils.html) extension.

Debug labels are presented on the timeline having specified color and name.

Another useful tool provided by extension and supported by VKtracer is object names. A user-defined name can be assigned to object by calling vkSetDebugUtilsObjectNameEXT. Assigned names will be shown in timeline tooltips on hover and in metrics views. In case sections of rendering are logically group into command buffers and render passes you can replace labels by simply assigning meaningful names to objects.

We've successfully tested VKtracer with the following games and engines: